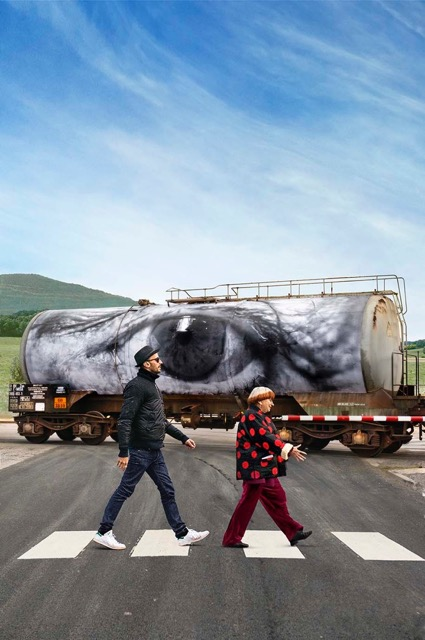 FACES PLACES is a French documentary celebrating true collaboration, creative expression at any age and a foundation of human warmth.

In it JR plays the young man bestowing kindness and cheek to 89-year old Agnes Varda, who shares her grace and lifetime of experiences, giving the pair inspiration as they go on the road together. But, what are they up to?

Despite the candid on-screen banter, Agnes Varda is one of the leading figures of French New Wave film, and together with 33 year-old French muralist JR, they produce breathtaking and often emotive large scale artworks. The film bounces along happily as we follow the duo’s physical journey and creative process of photographing the faces and places they encounter during a series of road trips to regional France.

The first ten minutes of the film reveal a staged ‘brainstorm session’ around a film the duo might make together, which feels a tad contrived, but is saved by French language and subtitles. JR and Agnes travel to far reaching places to hear the stories of seemingly ordinary industrial workers and village folks, photographing and immortalising them with large scale paste ups printed in the back of JR’s photo truck – the artworks lick an enormous stamp of humanity on sometimes foreboding and lonely environments, bringing much joy and a sense of pride for the toil, and the stories behind the work.

The artworks lick an enormous stamp of humanity on sometimes foreboding and lonely environments, bringing much joy and a sense of pride for the toil.

The film runs for an easily digestible 89mins, making it a sweet, uplifting affair filled with simple kindnesses, new friendship, valuing the wisdom of accomplished, ageing people and the importance of putting a human face on things. Any old thing. Art really is incredibly powerful. It is in this film, which deserves its Oscar nomination for Best Documentary in 2018.

Synopsis:
89-year old Agnes Varda (The Gleaners and I, Cleo from 5 to 7), one of the leading figures of the French New Wave, and acclaimed 33 year-old French photographer and muralist JR teamed up to co-direct this enchanting documentary/road movie.

Kindred spirits, Varda and JR share a lifelong passion for images and how they are created, displayed and shared. Together they travel around the villages of France in JR’s photo truck meeting locals, learning their stories and producing epic-size portraits of them. The photos are prominently displayed on houses, barns, storefronts and trains revealing the humanity in their subjects, and themselves. FACES PLACES documents these heart-warming encounters as well as the unlikely, tender friendship they formed along the way.

Faces Places A film by Agnes Varda and JR

Sunday best.
Feeling lively @celine in Melbourne with one of my favourites. Woof! @takeasecondofme
We're very excited to be doing our first public art show with a group of incredible Melbourne creatives this June. It's all made possible by @trashmagic_melbourne founder and visual artist Kerry Lennon. Link in bio.
I’ve been very busy. Please come visit @runtoparadiseau and let me know your favourites #runtoparadiseau #melbournedesigner #fitzroy
🏠🚣‍♂️🎣⛵️⛱
Oh love, the kindness you have shown us 💕
♥️♥️