Watch: The Killing of a Sacred Deer

Agreeing to watch this movie before 10am made me feel sick to my stomach. We entered the cinema with a heightened sense of dread and delight, and The Killing of a Sacred Deer certainly delivers on the promise of the trailer.

This is one disturbing film. Though I use the word ‘disturbing’, it’s not meant in a graphic sense; as in what you see on screen, but more how it makes you feel, like someone is trying to snuff you out with a thick blanket of daylight terror, and a kind of psychological fatigue as you struggle to relate real life to the outrageous premise of the film.

At first we are introduced to the banal existence of The Murphys, a seemingly perfect, over achieving family, with each character speaking in a monotonous, matter-of-fact tone. There is an immediately noticeable absence of emotion and the conversation style subtly lulls you in to the hypnotic world that the family exists in. Before long, the tightly controlled existence for each character in the film, is turned on its head.

The sound design is sparse except for the eerily loud, staccato music and the styling is stark and sleek. Clinical perfection. The air con in the cinema was on high too, which only helped add to a real feeling of concentrated unease.

As the story unfolds, the parents are grappling with a sense of hopelessness and loss of control, so you start to see the quirks in their personalities, kinks that they would normally keep very well hidden. Nicole Kidman’s character Anna Murphy reveals a fiercely tough core, despite being otherwise gracious and softly spoken. The film makes you question the lengths you would you go to to restore harmony within your own family and begs the question – can you ever really settle a score with the universe?

The film makes you question the lengths you would you go to to restore harmony within your own family and begs the question – can you ever really settle a score with the universe?

The Killing of a Sacred Deer is a cinematic example of a perfectly content family colliding with a seemingly friendly character who actually turns out to be an unwelcome intruder and/or menacing stalker.
The performances from the cast are excellent, but I couldn’t determine unwelcome intruder’s Martin’s hold over the Murphy’s – was the sequence of events down to karma? Is Martin an incarnation of the devil? Is he a sorcerer, a mentally unwell kid or a human face for vengeance on some higher plane?
For me the film was a snapshot of a family trapped inside their own private hell, indirectly of their own making. Though you finish the film feeling (in complete shock) satisfied that it resolved itself, you’re left pondering where the story actually began? I wouldn’t watch this one on your own. 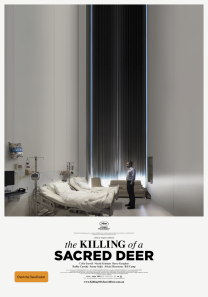 Synopsis:
Dr. Steven Murphy (Colin Farrell) is a renowned cardiovascular surgeon presiding over a spotless household with his ophthalmologist wife Anna (Nicole Kidman) and their two exemplary children, 12-year-old Bob (Sunny Suljian) and 14-year-old Kim (Raffey Cassidy). Lurking at the margins of his idyllic suburban existence is Martin (Barry Keoghan), a fatherless teen who Steven has covertly taken under his wing. As Martin begins insinuating himself into the family’s life in ever-more unsettling displays, the full scope of his intent becomes menacingly clear when he confronts Steven with a long-forgotten transgression that will shatter the Murphy family’s domestic bliss.

The Killing of a Sacred Deer is in Australian cinemas from 16 November, 2017. Click HERE for session times.