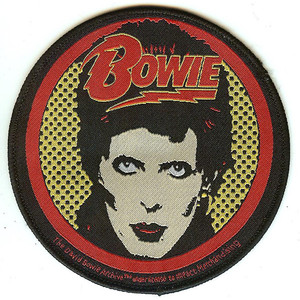 The journey through this exhibition begins long before you present your tickets at the main entrance. Upstairs is a wine bar and Bowie tribute band; a brilliant prelude to this audio-visual celebration of David Bowie’s astonishing career.

For me, it wasn’t just about stepping inside the archives of someone else’s life’s work, but also a thoughtful recollection of my own childhood where David Bowie in whatever guise, was just accepted without question, and provided much of the soundtrack to our young lives.

Wandering through the exhibition wearing venue-issued headphones, the sensors respond to your movements, with different Bowie classics dropping in and out of range, as you go.

Follow the journey of Davy Jones from Brixton, delving into archival documents, from scribbled lyric sheets, album artwork originals, films, video and photography, and the letter confirming his name change from Davy Jones to David Bowie – a seemingly ordinary article at the time – but one that was to become an important relic, both in content and media.

As expected, most of the costumes are small, yet there is a vast array of fifty on display, including the Ziggy Stardust Day Wear ensemble. Who knew Mr. Stardust had such a considered look for all hours?

As I made my way through, I became acutely aware of the consciousness of each character, phase, stage show and adornment. These things never occurred to me as a child.

The experience stirred memories of my Dad taking me to see The Man Who Fell to Earth, and having about the same understanding of the film’s premise then and now (see 00:34 sec above). Don’t over think this one.

If you’re half a Bowie fan and happen to be in Melbourne, make sure you go. You will yet become whole.

David Bowie Is, is currently on tour from London’s Victoria & Albert Museum and remains open at ACMI in Melbourne until 1 November, 2015.