There are a couple of things to contemplate before watching Toni Erdmann -it’s a wonderful choice if you like getting swept up in long films with subtitles. And, if you are, or have ever been part of an ageing father/ adult daughter combo, you may have an inherent understanding of the awkward frustration between the main characters of the film, but also the enduring ties that bind.

Winfried is the eccentric father of perpetually unavailable Ines, a humourless management consultant whose work existence keeps her pre-occupied and mainly absent from his life. The unease starts when Winfried discovers Ines having a one-sided business call with no one on the line. Silent pause. Soon after the phone incident, his dog dies, so Winfried decides to surprise Ines with a visit to Bucharest, where she is based. Unwanted, he immerses himself in his daughter’s superficial, emotionless existence by invading her perfectly controlled ‘adult identity’. A series of wacky pranks from her father start to see Ines unravel. The film is cringeworthy at times – you just cannot believe what either character is capable of – the ludicrous situations father and daughter find themselves in. Ines’ apparent incapacity for humour is astounding, until she finally turns, and Winfried’s work is done.

A few times during the session I wondered if I would consider leaving the cinema in case it got boring, but it never did. Winfried’s wish to challenge his daughter’s sense of what really matters in life had me caught up, perhaps in knots, but the film shows well the complexity of our deepest emotional relationships, and how easily we can forget the way they helped to shape who we are.

There is a song and a nude scene that will have you squirming in sheer confrontational terror. This film will challenge you, but it’s well worth the discomfort. It’s pretty funny. 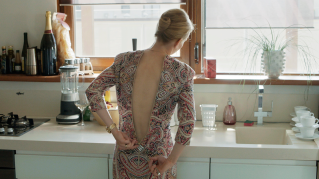 Winfried doesn’t see much of his working daughter Ines. The suddenly student-less music teacher decides to surprise her with a visit after the death of his old dog. It’s an awkward move because serious career woman Ines is working on an important project as a corporate strategist in Bucharest. The geographical change doesn’t help the two to see more eye to eye. Practical joker Winfried loves to annoy his daughter with corny pranks. What’s worse are his little jabs at her routine lifestyle of long meetings, hotel bars and performance reports. Father and daughter reach an impasse, and Winfried agrees to return home to Germany. Enter flashy ‘Toni Erdmann’, Winfried’s smooth-talking alter ego. Disguised in a tacky suit, weird wig and even weirder fake teeth, Toni barges into Ines’ professional life, claiming to be her CEO’s life coach. As Toni, Winfried is bolder and doesn’t hold back, but Ines meets the challenge. The harder they push, the closer they become. In all the madness, Ines begins to understand that her eccentric father might deserve some place in her life after all.

Toni Erdmann is in Australian cinemas from 9 February. Click HERE for session times.