All female music lineup for ‘Cindy Sherman Up Late’ at GOMA

From Friday 17 June, Brisbane’s Gallery of Modern Art (GOMA) will present a genre-defying, risk-taking musical line-up across seven dates to coincide with the Cindy Sherman exhibition at GOMA from 28 May to 3 October 2016.

The program celebrates the power of ‘she’ with an all-female bill of international and Australian performers including Eleanor Friedberger (US), Kimya Dawson (US), Mojo Juju and Jess Ribeiro (Melbourne) and Sampa the Great (Sydney), among others.

Cindy Sherman is the first major Australian solo exhibition by the New York-based artist in over 15 years, and GOMA will open exclusively after hours (5.30-10.00pm) on select Friday nights for the Up Late program. 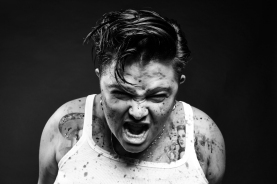 Each Up Late night will kick off with a set from Brisbane DJ collective Cheated Hearts supporting the performers:

better known as one-half of American indie rock band Fiery Furnaces, will play Up Late as the first stop on an Australian tour following the release of her third studio album, New View.

Brisbane four-piece Major Leagues bring the playful charm of their new EP, Dream States to the Up Late stage.

Sydney’s Sampa the Great reveals her penchant for poetry and dense lyricism in songs from her 2015 debut studio album.

Melbourne’s Teeth & Tongue will mesmerise audiences with a captivating combinations of garage and psychedelic rock, disco, folk, R&B and pop on the last Friday of the exhibition.

Sundays with Cindy will be a monthly Sunday afternoon series including a zine fair hosted by Brisbane’s Junky comics, a hands-on workshop with DIY blogger and artist Rachel Burke, pop-up curator talks and a discussion program with contemporary photo-media artists including Polixeni Papapetrou and Camille Serisier.

GOMA Talks Cindy Sherman will be held on Thursday 21 and 28 July. They’ll be free, live panel discussions in partnership with ABC Radio National and hosted by presenters Paul Barclay and Sarah Kanowski. These evening discussions will explore issues relating to contemporary feminism; from women in the workplace to online technologies – what’s changed, and what battles are still left to fight.  Drop into the Cinema Lounge before the talk to enjoy food and drink offerings from the pop-up bar, with music from Cheated Hearts DJs.

Pictured at top: Jess Rebeiro All images supplied with thanks by QAGOMA.