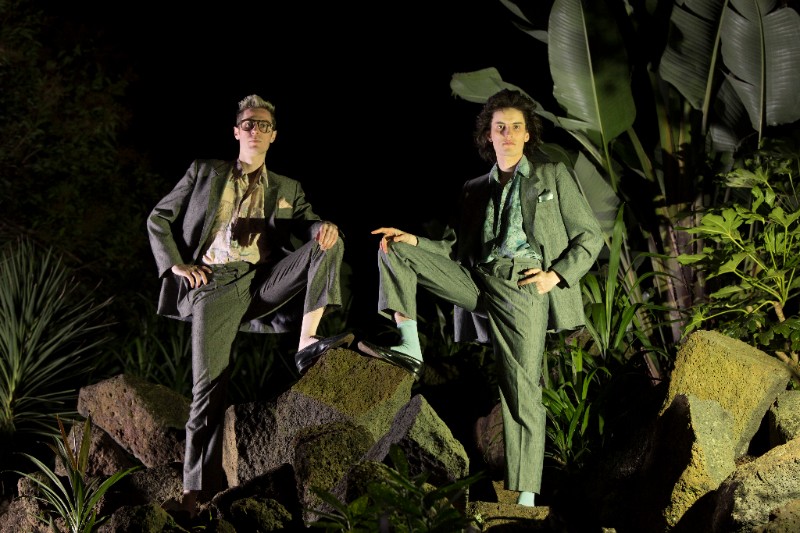 I’m in a pretty good mood today – hard to explain. You get used to a certain stress level, and once you identify it, it can become familiar and almost comforting (what a sick life mechanism). It’s my birthday tomorrow, and this photo of Client Liaison pretty much sums up how I’m feeling right now. Khaki Boss Paradise. I shall spend the entire weekend propping my leg up on to things, so people know who is actually in charge, here. Happy weekend to you, lovers.

Wild Life is the new single from Melbourne’s (and TGW fave) Client Liaison. It’s the second glance into the duo’s forthcoming debut album, which is out later in the year.

‘Wild Life’ mimics the rocky path of long distance love, where paradise is a state of mind, acting as the perfect antidote to the crazy ups and downs of the relationship jungle. Hint: It’s wild.

Check below for forthcoming festival appearances across Australia from August to December.

Youth is the second song from Glass Animals’ new record How To Be a Human Being which is out on 26 August. Buy and stream it here:

This new track from Two Door Cinema plugs directly into my regret valve, and fills the void of the noticeably absent Scissor Sisters. Their new album Gameshow is out soon, and if the last two singles are anything to go by, it will be disco genius, sung entirely in falsetto.

Producer and multi-instrumentalist Lanks will soon unleash his live show at BIGSOUND music conference in Brisbane. His performance at Splendour in the Grass had my husband in tears (of appreciation, that is – ‘the way he thrashed that drum machine…’)

This is the official video for latest single ‘Bitter Leaf,’ the visual manifestation serving as a testament to the power of the internet, bringing together a team of creatives from opposite sides of the world in this LA-shot choreographed masterpiece.

This is a gently melodic indie pop slice with the chorus straight from the school of Fleetwood Mac.

SAFIA’s debut album Internal is set to drop on 9 September. It’s easily one of the most anticipated Australian LP’s of 2016.  The video for their most recent single, ‘Over You’ was
directed by New Zealand-based concept specialist Marcus Hofko of The Bow and was shot in the United Kingdom. The cinematic clip is a surrealist expression of the haunting effect a broken relationship can leave behind.

See below for forthcoming tour dates.

Supported by triple j
Tickets on sale now via www.safia-music.com

Australian lords of critical acclaim, HOLY HOLY recently released their new single Darwinism. It’s from the band’s sophomore album, due out early next year, soon after they take the UK/EU tour circuit again in September/October.

This week’s curve ball is here mainly because I’m obsessed with the video. Powell’s single Frankie is lifted from the debut album Sport, out on Friday 14 October.

Sport is described as 14 tracks of difficult to categorise music, drawing on the spirit of punk, sampling the genre, but using the sonics in a modern way, and embracing the attitude of going against whatever else is happening – namely ‘making music that people will like.’

It’s hard to describe the attraction here, (perhaps one has spent too much time in the disarming bowels of Mona’s dark, Tasmanian corridors, but it’s intriguing, nonetheless.

To learn more about the vision behind Powell‘s Sport head to his website  and take a closer look at the artist’s successful billboard campaign.

Pre-order the new soundtrack for Baz Luhrmann’s Netflix Original series The Get Down, here.

Jack White Acoustic Recordings 1998-2016. This 26-track double-LP and double-CD will be released physically and digitally worldwide on Friday 9 September. Featuring alternate versions, mixes and previously unreleased recordings from The White Stripes, The Raconteurs and solo material all completely remastered, this is the essential Jack White songwriting collection. More to come on thegarbwire.com soon.